Take one bridge, and then move it. 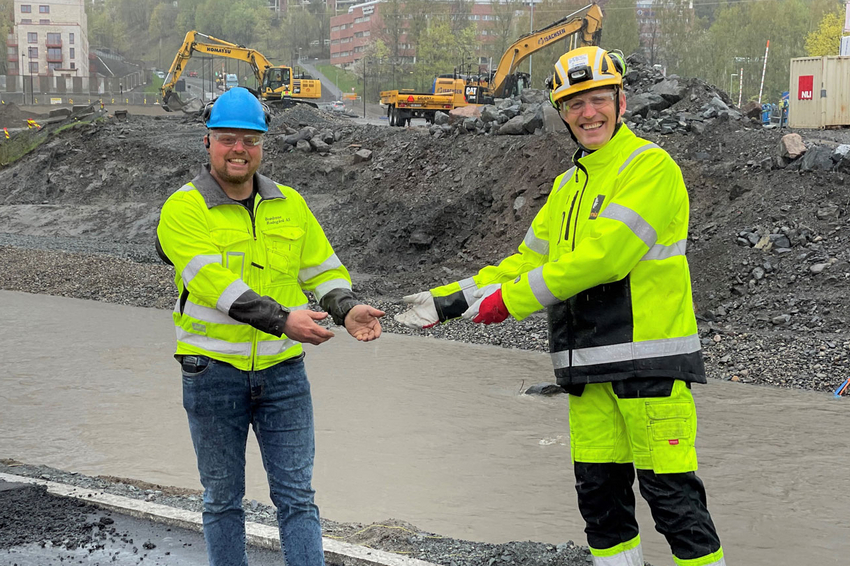 Recycling is obviously a huge priority these days. But repurposing a bridge is probably not something most people would dream of. Brødrene Rodegård, Implenia-Isachsen (IMIS) and the Norwegian Public Roads Administration were prepared to think out of the box. Which is why an old bridge from Sandvika is soon to be rebuilt in Nesbyen.

The creation of the new E16 between the Norwegian towns of Sandvika and Wøyen also requires construction of local roads in Sandvika, and their connection to the new highway. The job also includes the removal of five bridges. IMIS, a consortium formed by Implenia and Isachsen, had torn down four of these when project manager Ronny Abelsen got a call.

“I knew that quite a few bridges had to be demolished in Sandvika, as part of the E16 project. So I contacted them to see if one of these bridges might be suitable for repurposing,” says Kent-Johnny Rodegård of family firm Brødrene Rodegård AS. The construction company was founded in the mid-1960s by Kent-Johnny’s parents. Now run by the four Rodegård brothers, it specialises in excavation, blasting and construction.

The plan is to take the bridge that used to stand in the middle of Sandvika and rebuild it over the Rukkedøla river in Nesbyen where the brothers are building a road (2910) to a quarry owned by their company in Rukkedalen. “The local authorities are currently looking at the plans. Once all the necessary permits are in place, I hope we can put the bridge up in the autumn,” says Rodegård.

This environmentally-responsible contractor believes there is considerable potential for repurposing in the construction industry – certainly a lot more than is happening now. “The bridge elements I got from Sandvika were as good as new, and reusing them was the obvious choice; it’s a win-win situation,” says Kent Johnny Rodegård. “I’ve always been interested in recycling, because it’s more eco-friendly and cost-effective. I believe there is a lot of waste in the Norwegian construction industry, and that a lot more building materials and equipment could be repurposed.”

“A lot more building materials and equipment could be repurposed.”

“Sustainability is an integral part of everything we do, but repurposing bridges was not something we had a lot of experience of,” says Ronny Abelsen of IMIS. “We tried a few years ago on an earlier project, when we offered a similar concrete bridge on the finn.no website. There was a bit of interest from private individuals, but no one had the resources to actually make it happen. It’s great to have found a contractor who can use the old bridge elements in an eco-friendly manner.”

Rodegård’s new bridge is one of the former Birkheim bridges in the centre of Sandvika. It originally consisted of 13 prefabricated NIB beams, with site-cast slabs in the main span. To reduce the health, safety and environmental risks, the Birkheim bridges were demolished by cutting through the beams so that they could be lifted out in one piece and placed on land before the next stage. It was then possible to transport the approx. 200 tonnes of bridge elements by road to Nesbyen.

“This is an excellent example of the circular economy in practice.”

“This is an excellent example of the circular economy in practice. It shows very clearly that repurposing is possible and in many instances profitable,” says Ronny Abelsen. “More recycling of materials and the development of new, sustainable business models are two of the main objectives of Implenia and Isachsen Anlegg going forwards. So I hope we will see lots of similar examples in the years to come.”

May Bente Hiim Sindre, Project Manager at the Norwegian Public Roads Administration for the E16 Sandvika-Skaret-Høgkastet highway, echoes this sentiment. Two of her organisation’s five main objectives are to promote sustainability and reduce greenhouse gas emissions. “Substantial greenhouse gas emissions are generated when building new roads. A large proportion of these emissions come from the production of the materials we use, such as concrete. We are aiming for a 50% reduction in greenhouse gases emitted in construction projects by 2030,” she explains.

“We look forward to working with construction companies that come up with ideas like this.”

She is impressed by the achievements of Brødrene Rodegård and IMIS. “We are delighted and proud to be working with contractors who come up with ideas like this. If we are to succeed in reducing greenhouse gas emissions in the construction industry, it’s vital that all the relevant parties get involved,” she says.