Implenia is building a 2.4 km tunnel through soft ground as part of the Metro Line B extension in Lyon. The cutting head of the tunnel boring machine has to be maintained in tip-top condition despite the extreme humidity, heat and high ambient pressure. No problem for our French colleagues, who are certified experts in this complicated procedure. 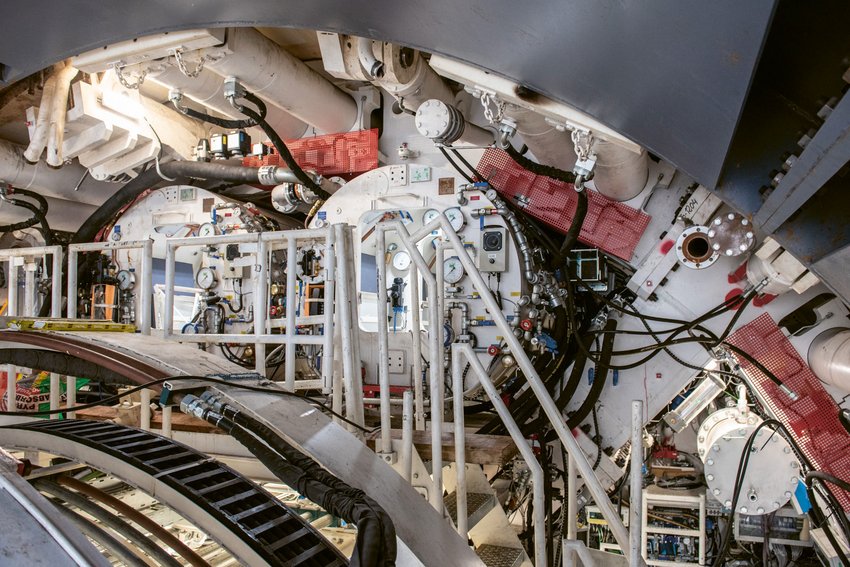 “Coline”, the variable density tunnel boring machine (TBM) being used for the Line B extension, was specially designed for work in highly complex geological conditions. A constant pressure is maintained to stabilise the subsoil, prevent collapses and maintain the cohesion of the excavated earth. The zone in front of the cutting head is a closed area, in which the pressure is three times greater than air pressure on the surface. It’s what divers experience at depths of about 20m. When maintenance is required on the TBM, or if worn cutting tools need replacing, the work has to be done in this zone.

These “hyperbaric” jobs are carried out using carefully controlled methods by employees specially trained in working in pressurised areas. Implenia France has around 40 employees who are suitably qualified. “You go through comprehensive training and have to meet demanding medical criteria,” says Karine Puyjarinet, Safety Officer and consultant on hyperbaric prevention. Workers are put through ENT examinations, blood tests, lung function tests, stress tests and pressure tests. As a rule, 20% of candidates fail to meet all of the requirements.

“Being able to carry out this kind of work is a real strength of our Group because it makes us independent and able to react quickly,” says Denis Vialle, Head of Underground Work and operational manager for hyperbaric work. Two or three workers who have been specially trained for pressurised environments work on each shift. Everything has to be done with the utmost precision. The temperature can exceed 40 degrees Celsius, and humidity can be virtually 100%. Individual replacement parts weigh up to 200kg and require very careful handling. “Depending on the geological conditions, this process has to be carried out once every two weeks in clay soil, for example, but it can be once a day if we’re drilling through granite and alluvial soil,” explains Armand Dupre, who is responsible for TBM production as well as being operational manager for hyperbaric work. There have already been 47 shifts worked in the first 700 m of tunnel.

The centre for hyperbaric medicine at the Edouard Herriot Hospital, which is located close to the construction site, looks after the teams. Medical professionals can intervene rapidly if there are any incidents or injuries, and a hyperbaric decompression chamber is available. Working under pressure can lead to severe joint pain and, in certain cases, may necessitate decompression in a medical pressure chamber.

Thanks to a partnership with Azoth System, the site also has a portable Doppler machine. Called the “O’Dive”, this is a medical device used to examine workers after every shift. Results show which working conditions raise or lower the danger of a decompression incident, so risks can be reduced by adjusting the decompression procedure. The experimental system has proved effective for ocean divers, but until now had not been used for hyperbaric operations in dry environments such as underground work.