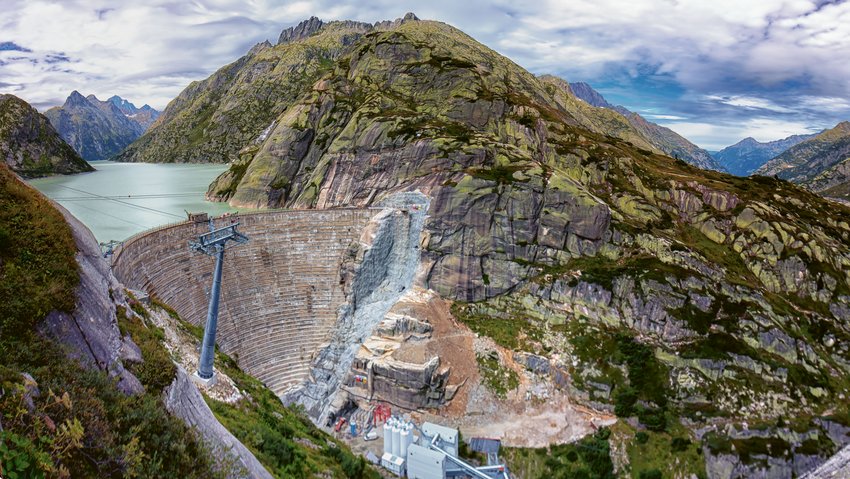 Lake Grimsel, which lies between the Berner Oberland and the Upper Valais, is the most important reservoir for power stations run by Kraftwerke Oberhasli AG (KWO). The Spitallamm dam is more than 100m high, and when it was built between 1928 and 1932, it was one of the first to use a curved profile. Over time, a fissure of a few centimetres developed in a vertical seam within the structure of the dam wall, between the mass concrete and the cladding concrete facing the water. Something had to be done. KWO decided to replace the old dam wall by building a new double-curved wall immediately in front of it, so the facility could continue to generate power even during construction. The ARGE Grimsel joint venture between the three companies Frutiger, Implenia and Ghelma has been building the new wall since 2019. Weather conditions in the high Alps mean that work can usually only be done between May and October. Construction during the first two seasons concentrated on preparatory work for access, foundation excavations and installations. The firms have set up a dedicated gravel plant and concrete works so excavated material from the job can be used directly to make concrete for the new dam. We have also built new tunnels and inspection walkways, as well as a 100m-high lift shaft. By the end of October, around 70,000m3 of rock had been excavated for the foundations. Gravel-making began at the start of September, and initial trials have begun for the dam concrete. Preparatory work is being completed in 2020; concreting work will start in the middle of July 2021. The new reservoir in the Swiss Alps will be finished in 2025. 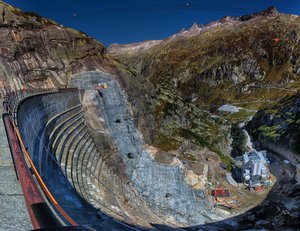 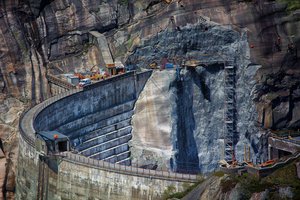