The trainee scheme is very important to Implenia because apprentices are our future specialists. The company puts a lot of effort into programmes like the trainees’ Social Project Week in Switzerland. Read the report written by three of our office-based apprentices, Gwenäelle Schnyder, Fjolla Abedini and Laurent Ethemi, to get an even better, unfiltered insight into the Social Project Week that ran from 13 to 17 July 2020 in Saas-Balen, a region marketed by Swiss Tourism as the “Pearl of Serenity”. The week-long event is one of the highlights of the year for Implenia apprentices in Switzerland. 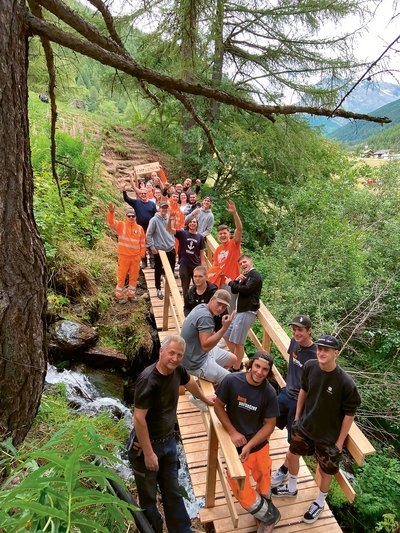 On the morning Monday 13 July 2020, we went up to the mountain region of Saas-Balen in Canton of Valais. We were greeted by a delicious lunch and then started work. We were divided into three groups, each of which worked on one of three projects: building a barbecue area, building bridges or creating a path.

The barbecue area included a fireplace and had to be built from scratch. We finished off the ground preparations that had been started by local municipal workers and erected the internal formwork. We then prepared and reinforced a specific area so that we could lay concrete to create a floor for the new fireplace.

The local municipality had also done the initial excavation for the path building. We had to top up the gravel to a specific level and prepare the hardcore so we could put the slabs on top. Thanks to the great preparatory work done by the municipality, we had already finished the work by Tuesday evening. We spent Wednesday and Thursday repointing the stone walls and putting up a wooden railing.

The bridge building was a little more complex because we had to fetch the materials we needed from further up the mountain. The first job was to put safety measures in place. A Habegger cable was used to rig up a life-line that we could rope ourselves onto. We could then start dismantling the decrepit old wooden bridge. Once this was done we excavated the ground for the foundations. Concreting was done in two stages because of the difficult terrain. Transporting the concrete was quite difficult because we had to keep going up and down to get it. Once the foundations were completely set we started building the new bridge. We used the life-line to transport the beams and various materials over the brook. After fixing the three wooden beams for the first bridge to the foundations we installed the bridge floor. Finally we fixed the handrails in place. Once the first bridge was finished we had a safe and easy route to the second bridge, which we quickly built using the same methods.

We worked very efficiently and completed the task ahead of schedule. By Thursday afternoon all the work was just about done, so we could enjoy the afternoon.

To start with we were concerned that the Social Project Week would be a little boring and much too difficult, but the opposite turned out to be true. The project leaders were also wrong to worry that they had planned in too much work for the four working days available. Thanks to excellent guidance from foremen Luca Cervasio, Nikola Jovanovic and José Pedro Magalhaes, and thanks to the sensational cooperation of everyone involved, including the municipal authorities, everything went well. We didn’t leave any work half done, but successfully completed all the structures.

The food was delicious each day and was extremely welcome after a long day on the construction site. There was always something to do in the evenings and we had great fun – either playing football or just hanging out, laughing and talking in the youth hostel. We didn’t really stay up late because we were exhausted after a day on site and needed our rest. And we took the odd nap when there was time so we’d be fit for work and for the evenings.
We knew that mountain weather is very different from what we get in the lowlands, but we didn’t expect to have to cope with everything from sunburn to freezing showers. It was dry and sunny for the first two days, then cloudy with a bit of rain on the Wednesday. By and large, though, the weather was pleasant for the whole week. The atmosphere was very good and we all got on well. As is usual in the construction industry there were far more men than women on the team during the social project week, and we women had to put up with some cheeky comments – people saying that things were too heavy for us to carry for example. But we didn’t let it affect us and gave the boys as good as we got. In fact it made us do our work even better, which the foremen noticed. We learned a lot during the week and are happy that we volunteered for the project. It gave us an insight into the world of construction and made a change from sitting in front of a laptop. We would like to say another thank you to the foremen and the people who looked after us and to everyone who made it such a fun time – I hope we see each other again.